In September 2018, Resound launched its new hearing aid range called “LiNX Quattro”.  Resound LiNX Quattro is available in both a non-rechargeable and a rechargeable receiver-in-canal (RIC) hearing aid style and is available in two performance levels: Quattro 9 (premium plus) and Quattro 7 (premium).  Quattro uses a brand-new chip that is 100% more powerful than Resound’s predecessor chip (Resound LiNX 3D) and the hearing aids also incorporate a redesigned wireless antenna for improved connectivity.  So, what does this mean for wearers?

Resound were the first to introduce direct Bluetooth audio-streaming from Apple (Made for iPhone) devices and have been at the forefront of this technology for the last five years.  Resound LiNX Quattro continues to offer this technology, but the real highlight is their promise of supporting direct wireless audio streaming from Android devices.

We all know that most of the world’s mobile phones run Android (estimated at 85 percent).  Consequently, there is certainly demand from hearing aid wearers for direct audio streaming from their Android devices.  However, Android fragmentation has made it difficult for hearing aid manufacturers to provide support to Android devices.  The standard Bluetooth protocols used in Android phones (and many other audio consumer products) are not suitable to stream audio to hearing aids.

The good news is that Resound has worked with Google to bring native hearing aid support for streaming on Android.  In August 2018, Google announced the upcoming release of a new hearing aid protocol for Android phones called Audio Streaming for Hearing Aids (or ASHA). The protocol aims to provide energy-efficient, high-quality audio streaming with low latency:

ReSound LiNX Quattro will be the first hearing aid to be able to support this new protocol to deliver direct streaming from Android devices.  This capability is expected to be available following an Android software release early next year.  This new Android software will likely be first released on Google Pixel smartphones, followed shortly after by other smartphone brands.

One of the benefits of Resound LiNX Quattro’s new chip, is that compared to its predecessor, it can process sound with a significantly increased bandwidth and dynamic range.  This results in an improvement in sound quality for the wearer.  It is great to see Resound has been able to provide improvements in this area as we have always felt the sound quality of Resound devices were inferior to major competitors like Oticon, Phonak and Signia.   However, we still feel the Resound LiNX Quattro still lags behind competitors with regard to performance in noise.  Unlike Phonak and Signia, the hearing aids do not use the latest “binaural beamforming” directional microphone technology for improved hearing in challenging situations (where there is a lot of background noise). 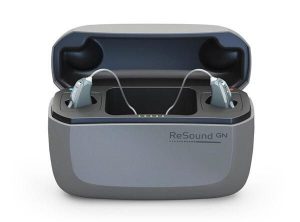 As an option, Resound offers a lithium-ion rechargeable LiNX Quattro model.  The rechargeable version comes with a charging case that can easily fit into the wearer’s pocket or handbag.  It can be fully charged in 3 hours which delivers 30 hours wearing time (less if using direct audio streaming).  This represents one the longest wearing times per charge in the industry.  If you cannot wait for a full charge, a 30-minute charge will deliver 8 hours wearing time and a one-hour charge will deliver 16 hours wearing time.  Wearers can even monitor the battery status of their Quattro hearing aids via the free Resound Smart 3D app (compatible with both Apple and

The Resound LiNX Quattro is a great option for people who utilise connectivity regularly, whether listening to music or taking phone calls.  They will be the first hearing aids in the industry to support both Apple and Android direct streaming without compromising audiological performance*.  Although Android streaming is not supported currently, we expect support to be available by early 2019.  However, its not currently clear which Android mobile phones will be supported initially.

The Resound LiNX Quattro is available from Sounds of Life and priced from $3200 each.