Do you remember when a mobile phone was just a phone, only used to make phone calls and to communicate?  Then smartphones came along, including popular models like the Apple iPhone, transforming the way people used their mobile phone.

Today, mobile phones are used not only to make and receive phone calls, but also, for endless other applications including web browsing, photo/video recording, personal navigation, music and video streaming.  Many of these functions are the result of the smartphone’s significant computational power, their range of sensors (e.g. magnetometer, gyroscope and accelerometer) and their support for wireless technologies (such as Bluetooth, Wi-Fi) for connection to the internet and other devices. 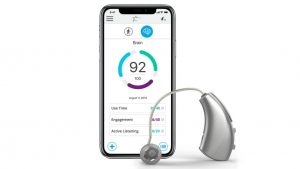 The new Starkey Livio AI hearing aids (released in Australia in early 2019) are being promoted by Starkey as the hearing aid equivalent to the smartphone.  Like smartphones they are designed to be multifunctional devices, transforming what hearing aids currently do, by offering more than just better hearing.  In addition, to offering the latest hearing aid amplification technology, they also support a broad range of functionality, particularly in the area of general health.

The Starkey Livio AI also uses the embedded sensors to monitor wearer’s physical activity.  The hearing aids come with a free app health app called the Thrive App. The Thrive App is downloadable from the Apple App Store of the Google Play store.  The appt is designed to measure both physical and cognitive health through two measurements; Body score and a Brain score.

The Starkey Livio AI also uses the embedded sensors to be able to detect falls.  Falls are a significant problem with the elderly.  When the hearing aids detect a fall, a notification is sent (via the mobile phone) to a pre-set loved one, so they know that the hearing aid wearer has taken a fall.

In addition to offering innovative features like Activity/Health Monitoring and Fall detection, the embedded sensors are also used to make the general management of hearing aids easier.  Normally when wearers want to adjust their hearing aids (e.g. adjust the volume), they must manipulate small controls (like switches) on the hearing aids.  This can be quite challenging for elderly users.  Starkey utilises these embedded sensors to offer a new feature called Tap Control.  Wearers can control their hearing aids by simply tapping the hearing aids.  This makes management a lot easier for wearers.

The Starkey Livio AI also offers real-time language translation through the Thrive app.  When communicating to someone in a foreign language, the person needs to simply ask the person to speak into the phone.  The Thrive App will then translate the language and then the translated audio will be streamed into the wearer’s hearing aids.   Currently this feature is only supported on Apple phones and when we tested it, it seemed quite buggy and unreliable.

Like most modern hearing aids, Starkey Livio AI support 2.4Ghz communication between the hearing aids and smartphones.   This includes offering “Made for iPhone” technology, where wearers can directly wirelessly stream audio into their hearing aids.  This is useful for taking phone calls or streaming music.  However, this technology is only available on Apple phones.  Android users will require an optional remote microphone accessory.  The accessory acts like a relay station to facilitate audio-streaming from any device supporting classic Bluetooth.  In addition, wearers can purchase a television streamer, to directly stream the audio from their television, wirelessly into their hearing aids.

We think it is exciting to have a hearing aid that does more than just improve people’s hearing.   The Starkey Livio AI offers several new and innovative features that are attractive and useful for some wearers e.g. fall detection.  However, ultimately people wear hearing aids to improve their hearing.  It is therefore crucial that hearing aids deliver the best sound quality and sound clarity in all situations including challenging situations with background noise.  Although Starkey Livio AI has some interesting and novel technology, we feel that in the area of audiological performance it lags behind Phonak, Unitron and Signia.  This is particularly evident in their directional microphone technology, which is particularly important for hearing clearly in challenging, noisy situations.

Sounds of Life offers the Starkey Livio AI at Brisbane’s most affordable price: