There are several advantages of lithium-ion hearing aids:

Signia is very experienced in the rechargeable space producing rechargeable nickel-metal-hydride hearing aids for well over a decade.  However, the Signia Pure Charge&Go RIC will be Signia’s second generation lithium-ion hearing aid replacing the popular Cellion primax RIC released in 2016 (see review of this model here)

The Signia Pure Charge&Go battery takes 3 hours to charge and delivers 19 hours of use.  Signia advises that this time is reduced slightly if the wearer does a lot of wireless audio streaming (e.g. listening to music or taking phone calls).  Signia indicates that wearers can expect 17 hours of use if wearers audio stream for 5 hours.

Pure Charge&Go is considerably smaller than its predecessor Cellion, In the past many wearers were disappointed in the size of lithium-ion hearing aid models as they were comparable in size to traditional 13 size battery models.  The new Pure Charge&Go is considerably smaller and comparable in size to traditional 312 battery models.

Pure Charge&Go uses Signia’s latest audiological chip platform: Signia Nx.  In our opinion this one of the most advanced hearing aid platforms on the market delivering superb sound quality and speech clarity even in challenging situations.  More information about the Signia Nx audiological platform can be found here. 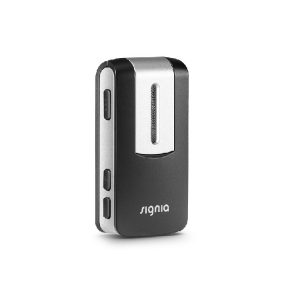 The Pure Charge&Go also features direct wireless audio streaming technology.  Wearers with Apple (Made for iPhone) devices can audiostream phone calls, music or any other audio input directly into their hearing aids.  Effectively their hearing aids become wireless headsets.  Signia offers a device called StreamLine mic that will enable wearers to wireless stream audio from other non-Apple Bluetooth devices.  The StreamLine mic can also be used as a remote microphone.  Wearers can give the Streamline mic to the person they want to hear (e.g. lecturer) and their voice will be wirelessly streamed into their hearing aids at a distance of up to 20 metres.

At Sounds of Life we are very excited about the Signia Charge & Go.  We believe the lithium-ion technology will improve the wearer’s experience by offering a hassle-free and convenient way of managing their hearing aids.  We have fitted many of the non-rechargeable Signia Nx hearing aids and feedback from our clients has been excellent.  Certainly for active wearers that are regularly in challenging situations with background noise, they benefit significantly from the advanced noise reduction technology in the Signia Nx platform.  Wearers also appreciate the direct audio streaming capabilities for phone use.

Special Launch offer – For the month of April, Sounds of Life is offering the charger free-of-charge for all binaural purchases of Pure Charge & Go.

Over the last couple of years, we have seen a shift in hearing aid wireless audio-streaming technology.  For many years, hearing aid manufacturers have supported wireless audio-streaming via additional Bluetooth hardware (intermediary devices).  This hardware provided a classic Bluetooth connection to consumer electronic devices like mobile phones, tablets and televisions.  This Bluetooth hardware then transmitted the audio signal to the hearing aids via a special low-energy proprietary (manufacturer-specific) wireless technology.  The main challenge typically in providing direct audio-streaming with classic Bluetooth without additional hardware is high battery consumption.

Approximately fours years ago the first hearing aids were released that offered direct wireless audio-streaming with Apple products without an intermediary device.  This was possible using Apple’s support of low-energy Bluetooth which is much more energy-efficient than Classic Bluetooth.   Since this time almost all manufacturers now support such technology labelled “Made for iPhone” specifically for Apple devices.

Most smart phones sold in Australia are Android-based.  Unfortunately, due to lack of standardisation of low-energy Bluetooth across the Android platform, until now direct wireless audio-streaming has not available for Android.  That is until now ….

Phonak invested heavily in R&D to bring what Phonak calls “Made For All” (MFA) direct wireless connectivity technology to market.  They have developed in-house a new chip called SWORD which offers unified 2.4 GHz Bluetooth with a single antenna.  The ultra-low power chip supports Bluetooth 4.2 in both classic and Low Energy modes and offers direct wireless connectivity to Android, iPhone and even traditional mobile phones.  Phonak calls this new technology “Made for All”.

Phonak’s new “Made for All” technology offers significant benefits, including for the first-time true hands-free voice calling.  Hearing aid wearers can use their mobile phone without ever having to physically touch it.  Wearers hear the phone ringing in their ears and once the phone is answered, the conversation is streamed directly into the hearing aid.  In fact, the wearer’s voice is picked up by the hearing aid’s microphone and transmitted to the mobile phone.  Wearers can also answer or reject a phone call by simply pressing the push button on their hearing aid.  The new Phonak Audéo B-Direct hearing aids can also be used as wireless TV headphones.  Using the optional AirStream accessory, wearers can stream TV audio directly into their hearing aids.

The Phonak Audeo B Direct is initially being released across three performance levels in a receiver-in-canal (RIC) model.

The new Phonak Audeo B-Direct really solves one of the big problems for hearing aid wearers that regularly use mobile phones.  Now even Android users can experience the convenience and sound quality of direct wireless audio-streaming.  Additionally, wearers can purchase a TV Connector accessory to connect to their TV or stereo system.   This plug and play solution turns wearer’s hearing aids into wireless headphones so wearers can enjoy their favourite TV programs and movies in stereo sound quality.

Since its introduction we have fitted a significant number of these hearing aids.  Clients have reported that the hearing aids are easy to use and offer excellent sound quality.  However, it should be noted that streaming from all phones is monaural (one side only).  The reason for this is that the hearing aid microphone on the non-streaming ear acts as the talk-back microphone.  At Sounds of Life we are pleased to offer the new Phonak Audeo B Direct at Australia’s lowest prices.

Signia’s new Own Voice Processing (OVP™) technology eliminates this problem by processing of the wearer’s own voice, completely independent from all other sounds, including all other voices.  The benefit for the wearer is that their own voice sounds more natural without the audiologist having to turn the hearing aids down for all the other sounds the wearer wants to hear.  During the initial fitting (under guidance by the audiologist), the wearer conducts an “own voice” training exercise which simply involves counting   Once trained the hearing aids will then be able to identify the wearer’s own voice.  At the recent Brisbane launch event we had the opportunity to test the new OVP™ technology and found it worked very well and certainly made one’s own voice sound more natural.

“Made for iPhone” for wireless audio-streaming to Apple devices 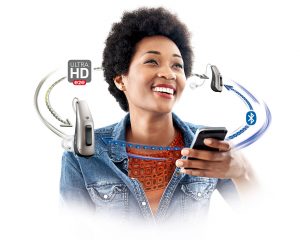 “Made for iPhone” technology enables direct wireless connection (without additional accessories) to Apple devices during phone calls and audio-streaming.  This means the hearing aids become virtual wireless headsets, so wearers do not need to hold the phone up to their ears.  This technology is fantastic for watching movies from iPads and televisions, with high quality sound, conveniently being streamed wirelessly into wearer’s hearing aids.  Although direct wireless audio-streaming is currently only available for Apple devices with  the new Nx range, Signia advises that an Android solution will be available early next year.

In addition to supporting “Made for iPhone” wireless audio-streaming technology, the new Nx hearing aids feature an upgraded full audio wireless link between the hearing aids (a technology Signia calls Ultra HD wireless e2e technology).  This wireless link enables binaural sound processing which is the basis for binaural features like narrow directionality which markedly improves hearing in background noise.   Signia promotes that they are the only manufacturer that offers both direct Bluetooth audio-streaming and full audio binaural sound processing in the one device.

Signia TeleCare is a tele-audiology solution that allows audiologists to remotely fine-tune hearing aids.  The new Signia Nx hearing aids feature Telecare 3.0 which allows full fine-tuning with video chat via the hearing aid wearer’s mobile phone.  No matter where the wearer is in the world, as long as they have a mobile phone connection, the audiologist can program and fine-tune their hearing aids.  The video chat feature provides a visual tool so the audiologist can check that the hearing aids are not damaged and are being worn correctly.  This is a great feature for busy hearing aid wearers (particularly travellers) who may find it difficult to visit the clinic.  Although Telecare 3.0 was not available in Australia at the launch of Signia Nx, Signia advises that it will be rolled-out in February 2018.

The Signia Nx suits active wearers who require high performance hearing aid technology to ensure they hear well in challenging situations with background noise.  One of Signia Nx’s features that we are really impressed with is the hearing aids use of the iPhone motion sensors.  Although not a focus of Signia’s marketing, the hearing aids use the smartphone’s Motion sensors to identify when the wearer is on the move so hearing aid features like directionality are activated and adapted appropriately.  This ensures audibility is optimised even in rapidly changing environments.

The Signia Nx also suits wearers who require wireless audio-streaming.  Wearers that rely on their smartphones will enjoy the convenience and sound quality experience of direct wireless audio-streaming without an additional accessory.   Wearers can also optionally purchase a Streamline TV transmitter and wirelessly stream Dolby quality stereo sound from the television directly into their hearing aids.

At Sounds of Life we have had the opportunity to fit a number of the new Signia Nx hearing aids since launch.  So far the feedback from clients has been very positive with reports that the hearing aids offer very good sound quality, especially when audio-streaming.  At Sounds of Life we are pleased to offer the new Signia Nx at Australia’s lowest prices.