Over the last couple of years, we have seen a shift in hearing aid wireless audio-streaming technology.  For many years, hearing aid manufacturers have supported wireless audio-streaming via additional Bluetooth hardware (intermediary devices).  This hardware provided a classic Bluetooth connection to consumer electronic devices like mobile phones, tablets and televisions.  This Bluetooth hardware then transmitted the audio signal to the hearing aids via a special low-energy proprietary (manufacturer-specific) wireless technology.  The main challenge typically in providing direct audio-streaming with classic Bluetooth without additional hardware is high battery consumption.

Approximately fours years ago the first hearing aids were released that offered direct wireless audio-streaming with Apple products without an intermediary device.  This was possible using Apple’s support of low-energy Bluetooth which is much more energy-efficient than Classic Bluetooth.   Since this time almost all manufacturers now support such technology labelled “Made for iPhone” specifically for Apple devices.

Most smart phones sold in Australia are Android-based.  Unfortunately, due to lack of standardisation of low-energy Bluetooth across the Android platform, until now direct wireless audio-streaming has not available for Android.  That is until now ….

Phonak invested heavily in R&D to bring what Phonak calls “Made For All” (MFA) direct wireless connectivity technology to market.  They have developed in-house a new chip called SWORD which offers unified 2.4 GHz Bluetooth with a single antenna.  The ultra-low power chip supports Bluetooth 4.2 in both classic and Low Energy modes and offers direct wireless connectivity to Android, iPhone and even traditional mobile phones.  Phonak calls this new technology “Made for All”.

Phonak’s new “Made for All” technology offers significant benefits, including for the first-time true hands-free voice calling.  Hearing aid wearers can use their mobile phone without ever having to physically touch it.  Wearers hear the phone ringing in their ears and once the phone is answered, the conversation is streamed directly into the hearing aid.  In fact, the wearer’s voice is picked up by the hearing aid’s microphone and transmitted to the mobile phone.  Wearers can also answer or reject a phone call by simply pressing the push button on their hearing aid.  The new Phonak Audéo B-Direct hearing aids can also be used as wireless TV headphones.  Using the optional AirStream accessory, wearers can stream TV audio directly into their hearing aids.

The Phonak Audeo B Direct is initially being released across three performance levels in a receiver-in-canal (RIC) model.

The new Phonak Audeo B-Direct really solves one of the big problems for hearing aid wearers that regularly use mobile phones.  Now even Android users can experience the convenience and sound quality of direct wireless audio-streaming.  Additionally, wearers can purchase a TV Connector accessory to connect to their TV or stereo system.   This plug and play solution turns wearer’s hearing aids into wireless headphones so wearers can enjoy their favourite TV programs and movies in stereo sound quality.

Since its introduction we have fitted a significant number of these hearing aids.  Clients have reported that the hearing aids are easy to use and offer excellent sound quality.  However, it should be noted that streaming from all phones is monaural (one side only).  The reason for this is that the hearing aid microphone on the non-streaming ear acts as the talk-back microphone.  At Sounds of Life we are pleased to offer the new Phonak Audeo B Direct at Australia’s lowest prices. 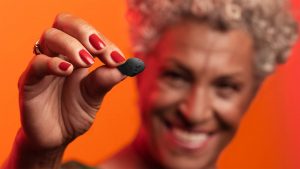